BUFFALO, N.Y. (August 8, 2022) Melinda R. Rich, who served as vice chairman, executive vice president and a member of the board of directors for Rich Products Corp. in her 37-year career, today became chairman of the family-owned corporate parent, Rich Holdings Inc.

In this long-planned transition, she succeeds Robert E. Rich Jr., 81, who served as chairman for 16 years, is now senior chairman, and will support his wife as she leads the company.

Ms. Rich, 64, known as Mindy, joined Rich’s in 1985 and worked in various roles as part of the leadership team, including executive vice president of innovation. In that position, she unified initiatives across the enterprise, established best practices and processes, and identified new business opportunities and technologies. She also expanded the breadth and accelerated the pace of product development in support of Rich’s long-term growth strategies. She also chairs the board’s Finance and Audit and Compensation and Organization committees.

“This decision was made after years of very deliberate and careful planning,” Ms. Rich said in a message to Rich’s 12,500+ associates worldwide. “Intentional succession planning is a crucial part of fostering a robust leadership pipeline – especially in a family-led company like ours. We expect and demand that our senior leaders actively participate in this kind of forethought, and we hold ourselves accountable to the same expectations as stewards of Rich Products and our family of businesses.”

Over the course of her career, Ms. Rich focused on developing and nurturing Rich’s award-winning organizational culture and work/life programs. She also served as executive vice chair of Rich Entertainment Group, responsible for overseeing the organization’s baseball, theater, restaurant and travel interests. She is a member of the corporate Board of Directors and the Compensation and Human Capital Committeefor M&T Bank Corp. She also is a member of the Cleveland Clinic Board of Directors; the Board of Trustees for Cleveland Rock & Roll, Inc./Rock & Roll Hall of Fame + Museum; and an advisor on BDT Capital Partners LLC’s Advisory Board.

“Serving this company as chairman is one of the great honors of my life,” she said. “I’ve had the privilege of being an integral part of Rich’s for nearly four decades and deeply admire and respect what we, as the Rich family, have built over the past 77 years. I have the utmost pride in what our family name stands for and an even deeper desire to preserve and protect what my predecessors worked so hard to establish.”

Mr. Rich said the planned transition is in keeping with the company’s strategic goals.

“We are steadfast in our commitment to remaining a private, family-owned company,” Mr. Rich said. “This was a deep desire of our founder, my father, Robert E. Rich Sr. And, over the years, his aspiration morphed into an unwavering, family-wide directive that is as fundamental to our identity as a company as the delicious products we make.”

“Maintaining this core value requires diligent design and preparation at all levels of the organization, but particularly as it pertains to succession planning for our most senior leaders. In her role as chairman, Mindy will assume stewardship of our multi-billion dollar, global enterprise, leading us into the future,” Mr. Rich added. “I have every confidence in Mindy’s ability to leverage her vast experience and wisdom as chairman.”

Ms. Rich graduated from University of Colorado in 1979 with a B.A. in Psychology and Business. She received an Honorary Doctorate of Humane Letters Degree from The Culinary Institute of America in 2001 and an Honorary Doctorate of Laws from D’Youville College in 2007. Prior to joining Rich’s, she also worked at Westwood Pharmaceuticals and Levy, King and White Companies, Inc.

“Mindy’s steadfast support and commitment to remaining a private, family-owned business that’s successful over the long-term cannot be understated,” said CEO Richard Ferranti. “Her leadership as chairman is key as we continue to transform our company to create greater value for our associates, customers and communities for generations to come.”

MEET RICH’S.
Rich’s, also known as Rich Products Corporation, is a family-owned food company dedicated to inspiring possibilities. From cakes and icings to pizza, appetizers and specialty toppings, our products are used in homes, restaurants and bakeries around the world. Beyond great food, our customers also gain insights to help them stay competitive, no matter their size. Our portfolio includes creative solutions geared at helping food industry professionals compete in foodservice, retail, in-store bakery, deli and prepared foods among others. Working in 100 locations globally, with annual sales exceeding $4 billion, Rich’s is a global leader with a focus on everything that family makes possible. Rich’s®—Infinite Possibilities. One Family.

Ms. Rich joined the company Oct. 7, 1985 and became a Director of Rich Holdings Inc. on July 28, 1998, at the annual board meeting. At the same meeting, she became chairman of the Audit Committee (now known as Finance and Audit Committee). In 2014, at the annual board of directors meeting, this committee was separated into two committees –Finance and Audit Committee and Compensation and Organization Committee and Ms. Rich was approved as chairman of both committees. Ms. Rich became an officer of the corporation on April 12, 1994, and vice chairman in July 2006. Ms. Rich became president of Rich Entertainment Group (REG) in 1993 before being named REG’s Executive Vice Chair in 2021. 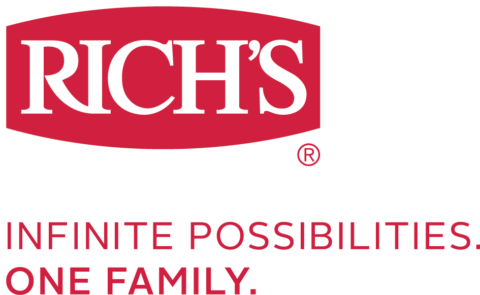